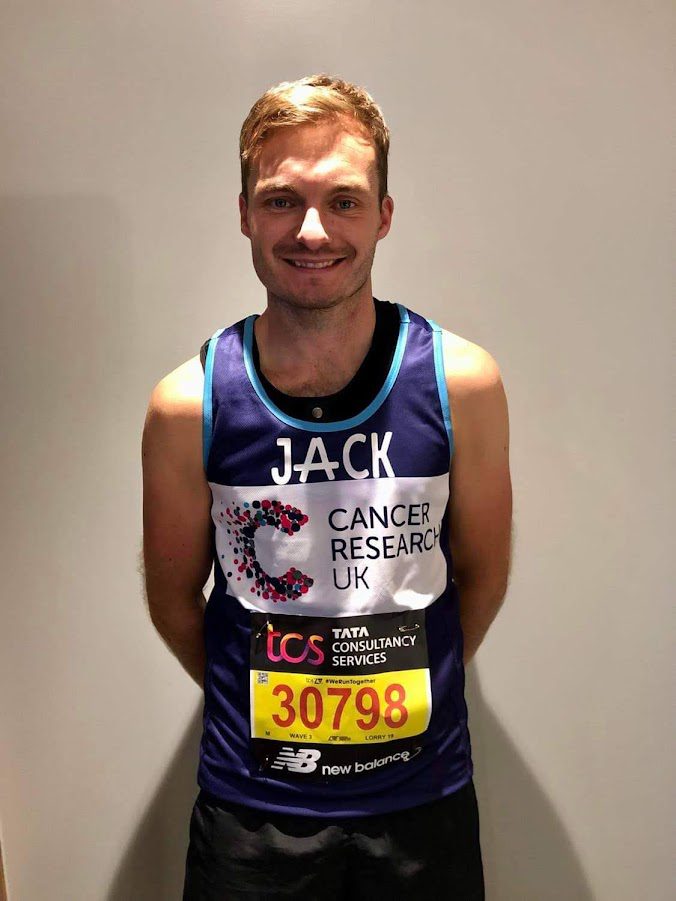 The owner of a lawn care company has raised £5,500 for charity after running the London Marathon in memory of the grandfathers who helped him take the business to the next level.

Entrepreneur Jack Chapman, of Kingsbury Lawn Care, West Midlands, smashed his target of £3,000 for Cancer Research UK, thanks to generous donations from friends, family and dozens of customers.

He’d spent months preparing, having clocked up more than 500 miles in training, not to mention the many miles walked up and down lawns.

The 29-year-old finished the run in 4h 49m, despite being physically ill just over halfway into the event.

“I’m absolutely blown away by the amount raised and really grateful to everyone who sponsored me,” Jack said. “I’d like to give a special mention to our customers, who gave the campaign a real boost in September, taking the total from £3,000 to £5,000 in a three-week period.

“I really wanted to finish in less than four hours – that’s what I was aiming for – but I just wasn’t right after 16 miles, and started being physically sick from around the 20-mile mark. While I’ve made my peace with it now, that’s not to say I don’t have a score to settle with a marathon distance at some point in the future!”

The seeds were sown for Kingsbury Lawn Care when Jack was just 15 years old and mowing lawns for his neighbours in the North Warwickshire village.

But it was thanks to the support and generosity of his grandparents that he was able to take the business to the next level by specialising in lawn care treatments and renovations. They loaned the money for the business’s first Ford Transit Custom van, which was pivotal in that next step of growth.

Kingsbury Lawn Care now has a team of four and looks after more than 1,000 lawns across the West Midlands.

Jack’s grandfathers, Robert Sanders and Stewart Chapman, both died of cancer in recent years, and he wanted to give something back in their memory.

“My grandparents not only believed and trusted in me but could see my vision to reach and help as many people as possible. It was their faith in me that was the catalyst to us serving just shy of 1000 homeowners today,” Jack said.

A Year of Growth All Round for Lawn Specialist

The fundraising achievement rounds off what has been a successful year for the business, despite the financial challenges that are beginning to take their toll on the economy.

There are big plans for 2023, including a new fertiliser programme using three organic-based fertilisers for the first time, which will improve the health of the soil and achieve even greater results. As well as being better for the environment, the upgrade will also improve soil protection and maintenance during drought conditions in future years.

The new year will see the company add another long-wheel base van to the fleet and a new member to the team.

Jack said: “We’re lucky that we’ve still been able to expand at a time when people are having to make savings and we really appreciate the fact that more and more people are trusting us with their lawns.

“But we don’t take anything for granted and will always continue looking for ways to improve the offering and add value for our largest customer base to date. This includes our new enhanced lawn care programme and negotiating with suppliers to keep costs as low as possible.”

“We’re adding a large van in the next few months, ready to take on additional mechanical work in the spring, such as scarifying and aerating and should be ready to employ another technician by the summer.

“Awareness of professional lawn care is rising; people are starting to realise that it can actually save money to get a qualified professional to look after your lawn, compared to spending lots of money on expensive shop-bought products that aren’t always the best for your garden, or the environment,” Jack added.

Kingsbury Lawn Care is the 2022 winner of the Micro Business of the Year Award at the West Midlands Federation of Small Business Awards.

The company also won Trades Business of the Year in both the 2018 and 2019 Tamworth Business and Community Awards, and was a Theo Paphitis Small Business Sunday winner in 2020.

It all began with Jack mowing his lawn at home using a push lawnmower for pocket money. He enjoyed being outdoors and posted flyers around the village of Kingsbury to expand his operations. He soon had 20 customers, before he was even able to drive.