On Thursday (11th March) we finally completed a Hike we’ve been wanting to do since we first started exploring Luchon and the local area.

Way back in 1907 it was agreed between local communes that a hotel would be built on the Superbagneres Plateau and that it would be accessed by a rack & pinion railway. The construction work for the railway was begun in 1911 and finished just 1 year later – something of a record for the era! In another step of forward thinking, the line was electrified and it is believed this choice led to it thriving for over 50 years.

In 1960 the road up to the plateau was inaugurated and with it a reduction in passenger numbers on the train, certainly in the summer months. And by the end of 1966 the railway was closed. By 1982 the last traces of the railway were gone when the station building in Luchon was removed.

Fast-forwarding to Thursday, the trail now starts near the gondola station in Luchon. 5 of us (plus one dog) set out at about 10:00 and you’ll be glad to hear that all of us made it to the very top for a well earned picnic. Heading south, it’s a really wide track when compared to other paths we’ve hiked here in the mountains, which is a throwback to the space needed for the train, tracks & equipment back when it last ran. Lots of the track is overgrown at the sides, but there are a couple of places where you could see buildings which had fallen into disrepair and spots where you break out from the forest and can take in the spectacular views. 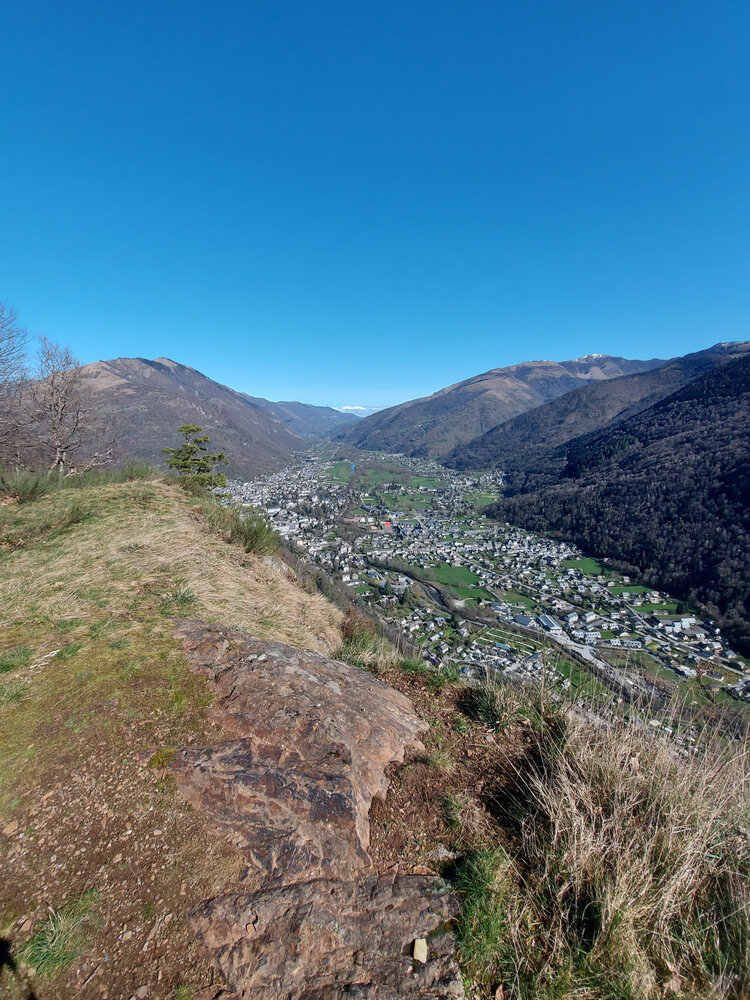 After about 40 minutes we took an enforced breather as Kiwi the Spaniel had taken the wrong path. When she finally found us she looked like she’d really enjoyed an adventure by herself.

20 minutes or so after that we found the Soulan Bend, where the track performs a fairly wide 180 degree turn to the North, well more North-West looking at the map. There’s a lovely viewing area here, so a water stop & a photo break were definitely in order.

Along much of the track are stone built walls (all green with moss) and remnants of the wooden poles that would have supported the electric lines above. The viaduct that carried the trains over a wide gorge is still intact and seems oppressively narrow when walking across, but that’s no more than perception playing tricks.

What we weren’t expecting was the constant gradient of between 15 & 30 %. Knowing the road as well as we do (which totals nearly 18km in length) it’s really easy to forget that climbing 1200m over just 6km means it has to be steep. I think we were all expecting some flatter sections to catch our breath & let the legs rest. 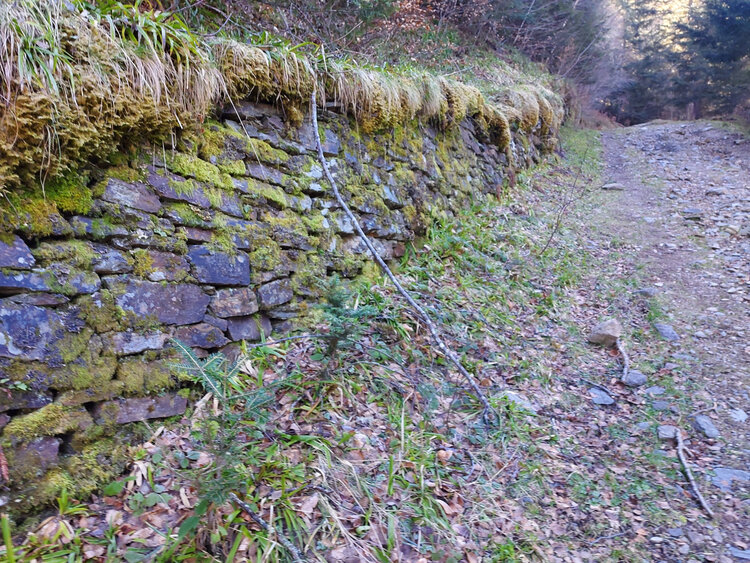 This next section seemed to be the toughest and you get to cross the Viaduct du Mail Trincat which triggered my Engineering brain. It’s obviously really difficult to photograph from the deck, but there are lots of photos online. It's quite the feat of construction in it’s own right. A classic stone arch construction from the era, but a series of small arches supporting the deck built off one much larger arch to cross the gorge. 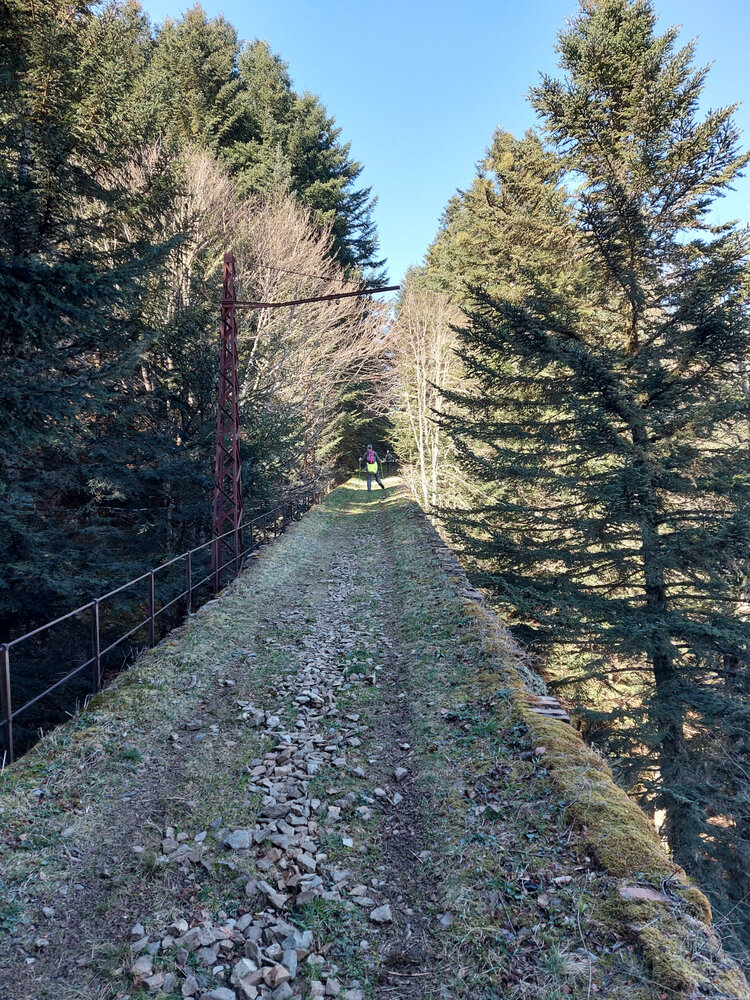 At the end of this long stretch, about 2 hours in, we stopped again for snacks & drinks and to take in some views as we’d broken out from the forest again. There are a few fallen trees along this section, but you didn’t need to leave the track to pass them. This would have been near the original Artigue-Ardounne stop and we recognised a part of the ski station and started to feel like we were really getting somewhere.

On reflection, I think realising we’d made it to the lower slopes of the ski station was a hindrance. The thoughts of ‘almost being there’ crept in, but we still had a solid hour of hiking at 20 % to go. Consequently the last of the long sections seemed to drag more than it should have. It was cold & frozen underfoot, but the track is still plenty wide enough to choose suitable footing.

We finally broke through the forest for the last time near the hut that would have marked the former Fontaine-Broucas stop, and we were rewarded with spectacular & familiar views of the ski station. We stopped again to rest the legs (and to take more photos) on a handy bench. From here you’re walking in the open and thankfully for us – glorious sunshine. But the gradient is still unrelenting. You head, slowly, up towards the Lac Piste & Chairlift overhead, heading directly towards the apartment blocks. Cross the piste and you’re now following the piste that connects the Croque-Vite cafe to the Lac Sector. 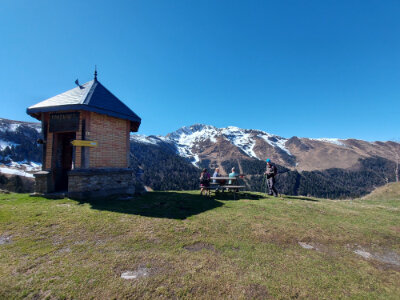 The obvious route peters out adjacent to the Croque-Vite where there road now is and it’s difficult to see how it would have swung around back to the last station at the Grand Hotel. We followed the road up to the plateau and found a suitable spot for a picnic on the grass. 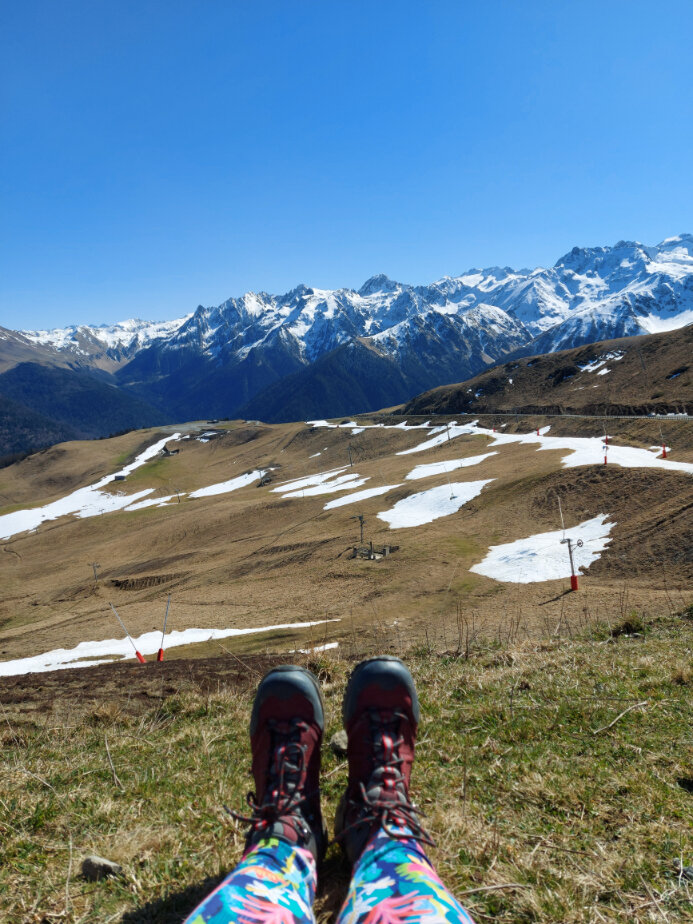 We all rewarded ourselves with Crepes & Coffee at one of the cafes doing takeaway before heading down to Luchon on the Gondlola.

As a former engineer, I find it astounding that the construction was completed in 12 months. Such an enormous amount of work with nothing like the technology we have today.

There are more photos over on our website – https://thefreerangechalet.com/blog/hiking-the-crmaillre

Or check out our Hiking Holidays here – https://thefreerangechalet.com/walking

Congratulations @EmmaWadeART on your #SBS win😊 Please DM your email address so we can send you all your winner info!