Tech entrepreneur completes Three Peaks Challenge and raises over £1,000 in memory of his friend lost at sea

Tech boss Kyle Holmes, of Black Nova, a tech company based in the South West, has fulfilled a challenge to scale Three Peaks in three days. Kyle and his friend Danny have raised more than £1,000 for the RNLI in memory of a friend who died at sea 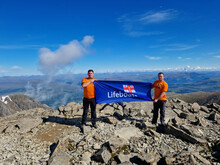 Tech boss Kyle Holmes has recently smashed two personal goals by conquering the National Three Peaks Challenge over the Jubilee weekend and raising more than £1,000 for the RNLI.

Kyle (30), who is the co-founder of tech company Black Nova, based in Calne, Wiltshire took on the challenge in memory of his friend Anthony (Ant) Miller who lost his life at sea. So far, more than £1,000 has been raised for the lifeboat charity.

“It was exhausting but exhilarating and I’m so thankful to my partner in this feat, Danny,” Kyle said.

Choosing to challenge himself, Kyle said he “couldn’t have timed it better”. With his mental health improving and becoming more positive, completing the Three Peaks Challenge was a brilliant way for him to overcome one final hurdle.

During the completion of Ben Nevis, Kyle and Danny experienced a lot of tiredness and found this to be the most challenging mountain with Kyle suffering pain in his knee.

Despite the struggles of the first ascent, the next two mountains came as a pleasant surprise. Both Scafell Pike and Snowdon were much more enjoyable.

Kyle said: “Walking has become a form of therapy for me. Completing the climb on each mountain was the best thing I have done in my mental health journey so far, despite the injuries I faced. Being able to stand at the peak each day and look out at the view was very fulfilling.”

Kyle scaled Ben Nevis, Scafell Pike and Mount Snowdon alongside his good friend, Danny Parsons. Danny’s employer, David Horton Contractors, sponsored the cause and were fully supportive of the challenge.

All of the money raised by Kyle and Danny will be used to train and equip the volunteer lifeboat crews and lifeguards who operate around the coast, enabling them to save lives.

Kyle said: “Walking has helped me process my grief of Ant’s loss. It helped to know that the Three Peaks Challenge and the funds raised will help the RNLI to continue their life-saving work to help those in trouble in the sea – as well as educating us all about the dangers of the ocean.”

Around 140 people die by accident in UK and Irish waters each year. It costs approximately £139.2 million for the RNLI to run each year, with the majority of that funding (92 per cent) coming through public donations. These donations help to save 23 people every day in UK waters.

To find out more about Kyle and Danny’s fundraising efforts and to make a last minute donation, visit: https://www.justgiving.com/fundraising/kyle3peaksin3days

*Photo shows Kyle Holmes, of Black Nova, based in Calne with his friend Danny Parsons (David Horton Contractors) who conquered the challenge together over the Platinum Jubilee weekend. This was taken at the top of Ben Nevis.

For more information about Ant’’s story and the dangers posed by the sea, visit: https://www.youtube.com/watch?v=kFiAA5qjXIY&t=153s

PrevPreviousWe Are Up & Running!
NextWILTSHIRE-BASED TECH COMPANY SPONSORS DANCE GROUP AHEAD OF THEIR APPEARANCE AT THE 2022 DANCE WORLD CUPNext

We love this - thanks for sharing 😀 🌻 #sbs #sbssunflowers