Clinging on to a Dragon!

Well lots has been happening over here at chez Ali's Craft Studio since I last wrote! To say it has been an exciting fortnight is a huge understatement to say the least!!

Those of you familiar with Twitter may be aware of the competition run by Dragon's Den star Theo Paphitis every week to support small businesses.  Called Small Business Sunday (shortened to the hashtag #SBS) he receives 1000s of tweets between 5pm and 7.30pm every Sunday evening which, aided by his family, he wades through & chooses his favourite six to retweet to his almost 300,000 followers. Recognition of this kind is worth the world to all the small businesses out there struggling to make it through a recession which has knocked out some of the biggest names on the High Street! 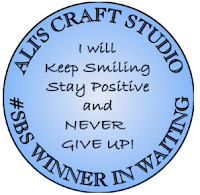 It can be a long process getting noticed in a sea of amazing tweets and some people simply give up trying! However, perseverance in key in business and this is true here too! Back in April, I even created myself a 'badge' to show my determination to keep trying!

This caught the attention of other people who were also trying to join the exclusive #SBS club and there is now a growing group of amazing people who support each other under the #SBSWIW tag including some who are already #SBS winners but are there to offer encouragement!

Anyway, over to my big news…

On Sunday 18th November, I sent my 140 character 'advert' for Ali's Craft Studio as I had done 43 times before.  I haven't missed a week since joining Twitter in January!! Theo takes a while these days to get through the increasing number of tweets so now does his retweeting on a Monday evening.  So, there I was at 8pm on Monday waiting for the six lucky 'winners' to appear! I always send congratulations to each one but this week was different…

Theo's retweet no. 2 was this: 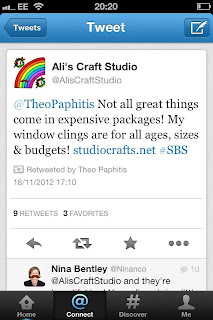 From that point on, everything went first into slow motion then fast forward!! My Twitter timeline (showing all the people sending me messages) went into virtual meltdown and the most wonderful messages of congratulations span round like a just pulled, one arm bandit!!

My website had more visitors than any day since it started and I gained 100s of new Twitter followers too! By the next day, I had received orders for window clings from people who hadn't seen me before which was incredible! 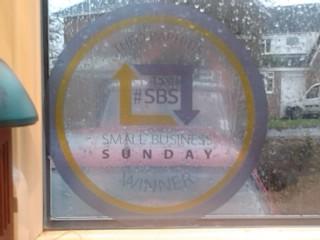 It took a couple of days just to work through & thank everyone, but one of the first things I did was add my profile to www.theopaphitissbs.com which is a website exclusively featuring #SBS winners; and add a winner's badge to my website!

I have been creating window clings of winner's badges by request for a number of previous #SBS winners and now I could make my own!! I decided to go for a large clear version that I can read from my desk and even on rainy days, it makes me smile!

Following that the job was to get a press release together (which I did with the help of the wonderful Stacey, a fellow #SBS winner, who runs her own business Stacey's Admin Solutions) and this was sent out on Monday morning without any real expectations.

So, perhaps you should get your orders in quick – this award winning business is going places!

You still have time to order for Christmas! Check www.studiocrafts.net for deadlines.

And before you ask… No – I'll not forget you when I get my first million!!

Following a successful four year partnership with Autumn Fair, which has supported around 40 start-up businesses so far, Spring Fair will now host the #SBS winners, offering them a free stand within the dedicated #SBS village in hall 4. Theo Paphitis said: “Exhibiting at Autumn

@KateOBrienArt Hi there, please email sbs@tpretailgroup.com and we can get you registered :)