It's here again!  Another BBC series of Poldark, based on Winston Graham's books.  As well as the drama and brooding, the show has been made popular through its use of the breathtaking landscapes of Cornwall, all within easy reach of our boutique cottages.  We've compiled a comprehensive list of the main shooting locations, so read more to discover Poldark's Cornwall. 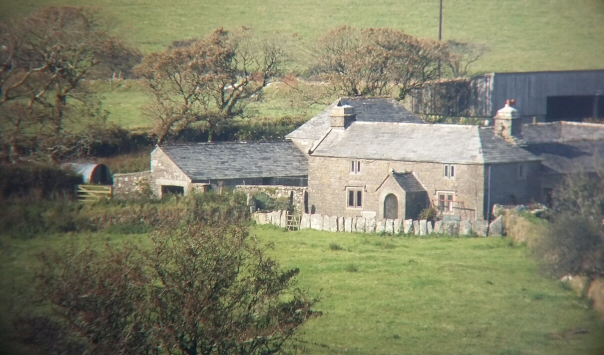 An isolated private farmhouse near St. Brewards is used as Nampara (external shots, see below), while cottages at Minions were the homes of his tenants and miners.  There are also many shots of the characters riding across the moor – for example in Episode 2 when they go to Bodmin assizes – where Roughtor and Brown Willy are visible in the background.

Extra info:  The external shots of Nampara cottage are filmed at the privately owned Ivey Farm, approximately 2 miles east of St. Breward.  Although there is common access land (part of Bodmin moor) leading up to the farm buildings from the road just north of the farm, it is not a view you will recognise from the series (in which the cottage is always filmed from the south).  If you are really determined, you can park near Carbilly tor then descend to the De Lank river and follow it around – this affords you a legal view from the South West.  Alternatively, walk from Carkees tor or Hawk's tor to get a view from the East.  Make sure you take a map – the common access stops quite suddenly and straying into the farmland would technically be trespassing – and please respect the residents. 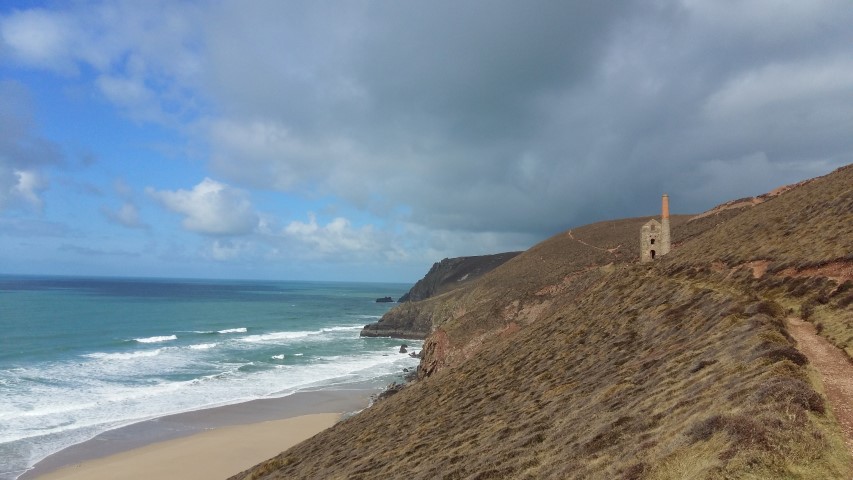 This is a stunning part of the North coast and portrays Nampara Valley and the mine in certain shots.  Wheal Coates is one of the most photographed places in the county.  You can explore the ruins of several mine buildings, and the local beach of Chapel Porth, and the dramatic coast path are also worth the visit alone.
—————————————————————— 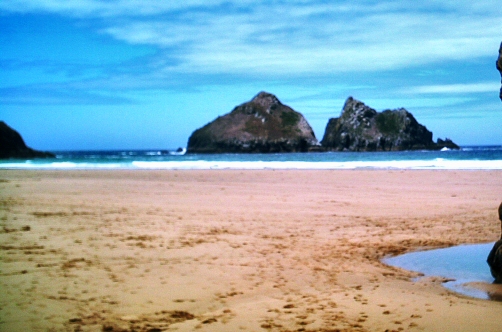 The long sandy bay and Gull Rock is used in Series 2 to represent the Warleggan's beach next to Poldark's Nampara.  The impressive rocky headlands of Gwennap head are visible in some of the advertising shots for the Series 2.
——————————————————————

These mines (with the help of some computer generated refurbishment) portrayed some of the mining infrastructure in both series.  Specifically, the Owles & Crowns mine near Bottalack depicts Wheal Leisure, and Levant Mine portrays Tressiders Rolling Mill. 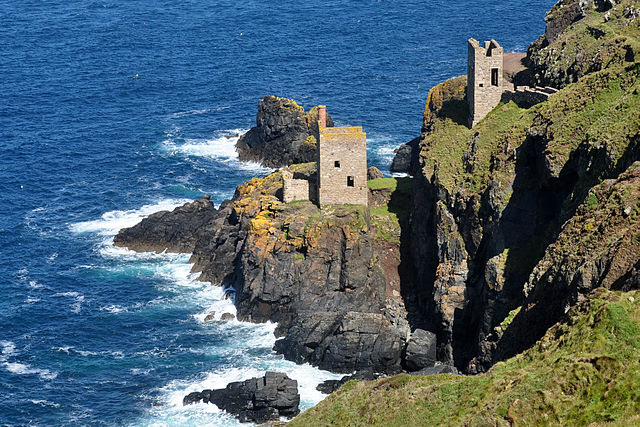 Porthcurno beach is famous for being overlooked by the Minack Theatre, built into the rocks.  Due to computer trickery of course, this won't be visible when it is used in a dream sequence in episode 2 of the second series.  The bay is characterised by the dramatic headland of Treryn Dinas, once an Iron Age fort.

Almost the next cove Eastwards, less than 2 miles away is the beautiful stone hamlet of Penberth.  This is where the patients of Dr. Enys live – for example Rosina and Charlie –  and is immediately recognisable by the quaint stepping stones that characters use to cross the stream. 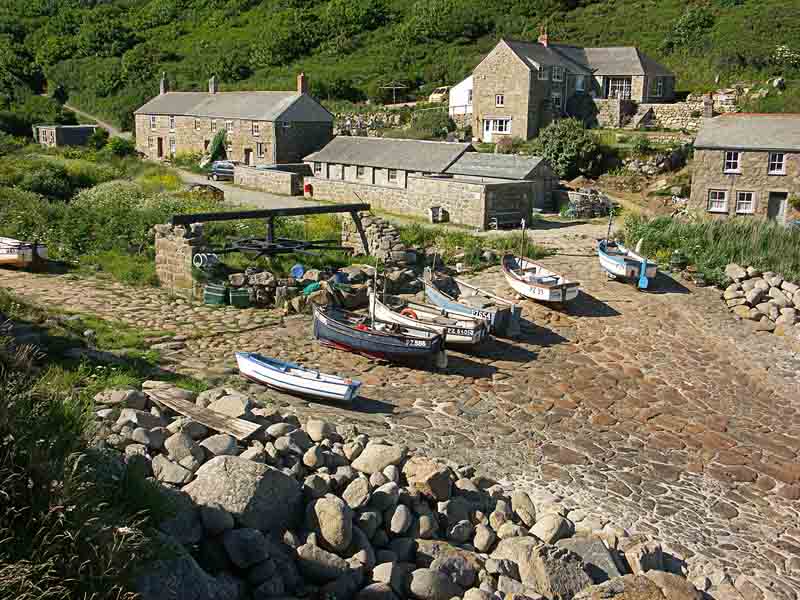 Although it opened after the era of Poldark's character, the narrow corridors of this tin mine are the perfect location to shoot the interior mining scenes.  The mine is the only complete mine currently open to the public. (http://www.poldarkmine.org.uk/)

Dollar cove is used in Series 1 for the night-time shipwreck (although many sources incorrectly say it's Church cove).

In series 2, the stunning clifftop cottage of Dr. Dwight Enys is filmed in the more northerly cove (Fisherman's Cove) in what was until quite recently a ruined shell.  Follow the lane opposite the Halzephron pub to find it.

Thanks to Diana Morris for her corrections. 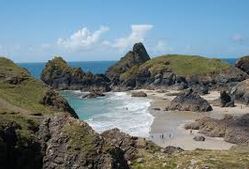 An incredibly picturesque beach – one of the most popular in Cornwall – is also used as Nampara bay in certain shots to be seen in Series 2.  Slightly further up the coast between Kynance and Mullion are the gorsey rounded clifftops used in some of Poldark's many galloping-along-cliffs scenes! 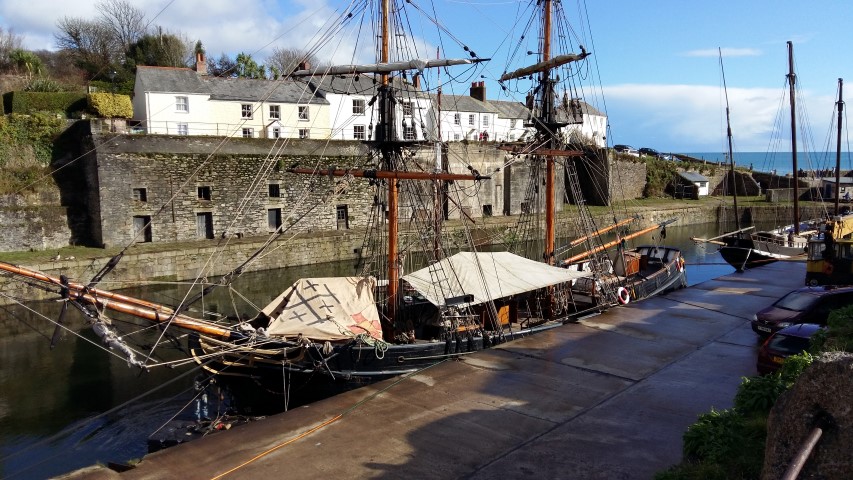 This historic port is used in the harbour scenes and is instantly recognisable.  The tall ships and narrow stone quay have featured in many films and series.
——————————————————————

Locations outside of Cornwall

You will notice from the above that not all the scenes are covered, because we've only focussed on the Cornish locations.  Here's a rundown of the other main spots:

In the first series, Truro street scenes are filmed at Corsham (Wiltshire), but due to the massive disruption caused to the tiny market town (and a lot of complaints), for the second series they've opted for Frome in Somerset.

Trenwith, the Poldark mansion, is filmed at Chavenage House in Tetbury, Gloucestershire, and has limited opening to the public.

Killewarren, home of the Penvenens, is filmed at Great Chalfield Manor, a National Trust property near Bath.

Warleggan House is filmed at several different private estates in the Bristol area.

Some of the properties in our guide are privately owned residences.  In most cases, owners don't resent a certain amount of attention, and indeed have come to expect it from being featured in one of the most popular TV series of recent times – but please be respectful and make sure you are not trespassing.

We love this - thanks for sharing 😀 🌻 #sbs #sbssunflowers